The story of re-opening The Wimpole Eye Clinic after lockdown

As growing numbers of private doctors move closer to resuming private practice, I was asked by the Independent Practioner to tell our story of The Wimpole Eye Clinic and its phased re-opening.

I opened The Wimpole Eye Clinic, here in London, on 29th October 2015 and closed it again on 23rd March this year, the day of the lockdown.

After appointment as consultant surgeon to Moorfields Eye Hospital some 25 years ago, and having built up a private practice both there and at The London Clinic, it was my long-term ambition to enjoy the independence –not to mention the legacy and the hoped-for investment value – of owning my own clinic.

The plan had been to invite my closest subspecialist colleagues to work with me; colleagues to whom I have referred numerous patients over the years and to whom I would happily send all my friends and family, not just my mother-in-law.

I had been looking for premises around Harley Street over the years when one happy patient asked if I had ever thought of owning my own clinic? Had I!

I explained that, notwithstanding the expense, it seemed all the decent properties were taken – mostly by Howard de Walden. Those still on the market, often after months or years, either needed major re-constructive surgery or had unworkable legal constraints.

My patient had been ‘in property’ all her career and reassured me she was confident of finding something suitable. I reassured her I would not hold my breath.

Then, a few months later, she called with the news that a doctor who owned a clinic at 46 Wimpole Street with the freehold was thinking of selling.

It was perfect for developing into an eye clinic with plenty of space and a layout that permitted good patient flow – which was to come in particularly useful as lockdown began to be relaxed.

So after a six-month period of refurbishment, I opened The Wimpole Eye Clinic on 29 October 2015 – and closed it again on 23 March this year, the day of the lockdown.

And to think that I had assumed that 2020, regarded as a decent standard on the eye chart, was certain to be a good year for ophthalmologists.

And so to lockdown.

My colleagues and I had much NHS admin to do at Moorfields in firstly cancelling patients who could be safely removed from clinic and theatre lists and then stratifying them for re-booking at a later date according to their level of risk.

We all took part in an ‘emergency or semi-emergency’ rota, which made us feel that at least we were helping in some small way – that is to say, less guilty – while others were at risk on the front line.

I convinced myself that, as it had been 35 years since I was a casualty officer at University College Hospital, I would most certainly have been more of a hindrance than a help to those who actually knew what they were doing.

As I readily admit to friends and family: ‘I used to be a real doctor!’ I, therefore, kept my head below the Moorfields parapet and stuck to the rota.

But it must be said that, at best, our work at Moorfields Eye Hospital has been part-time due to the lockdown – I have done only one emergency corneal transplant, for trauma, in almost three months.

We are all aware, of course, that it will be ‘payback time’ soon.

On the private side, and as the lockdown has eased, a number of clinics have opened in a limited way, respecting the Government guidelines on distancing and precautions regarding personal protective equipment (PPE) and seeing strictly limited numbers of patients as clinical need versus risk, specialty and premises allowed.

Essential step
I asked the adviser who had helped with my original Care Quality Commission application to provide an on-site risk assessment.

This was an essential step, which I would strongly recommend to those who are planning to open up their practices.

Although we had been observing strict guidelines at Moorfields, and I was familiar with the numerous precautions, there were other very constructive suggestions made at the inspection specific to my clinic.

The adviser also provided a comprehensive 30-page Covid-19 protocol. The key points are set out in the box below. 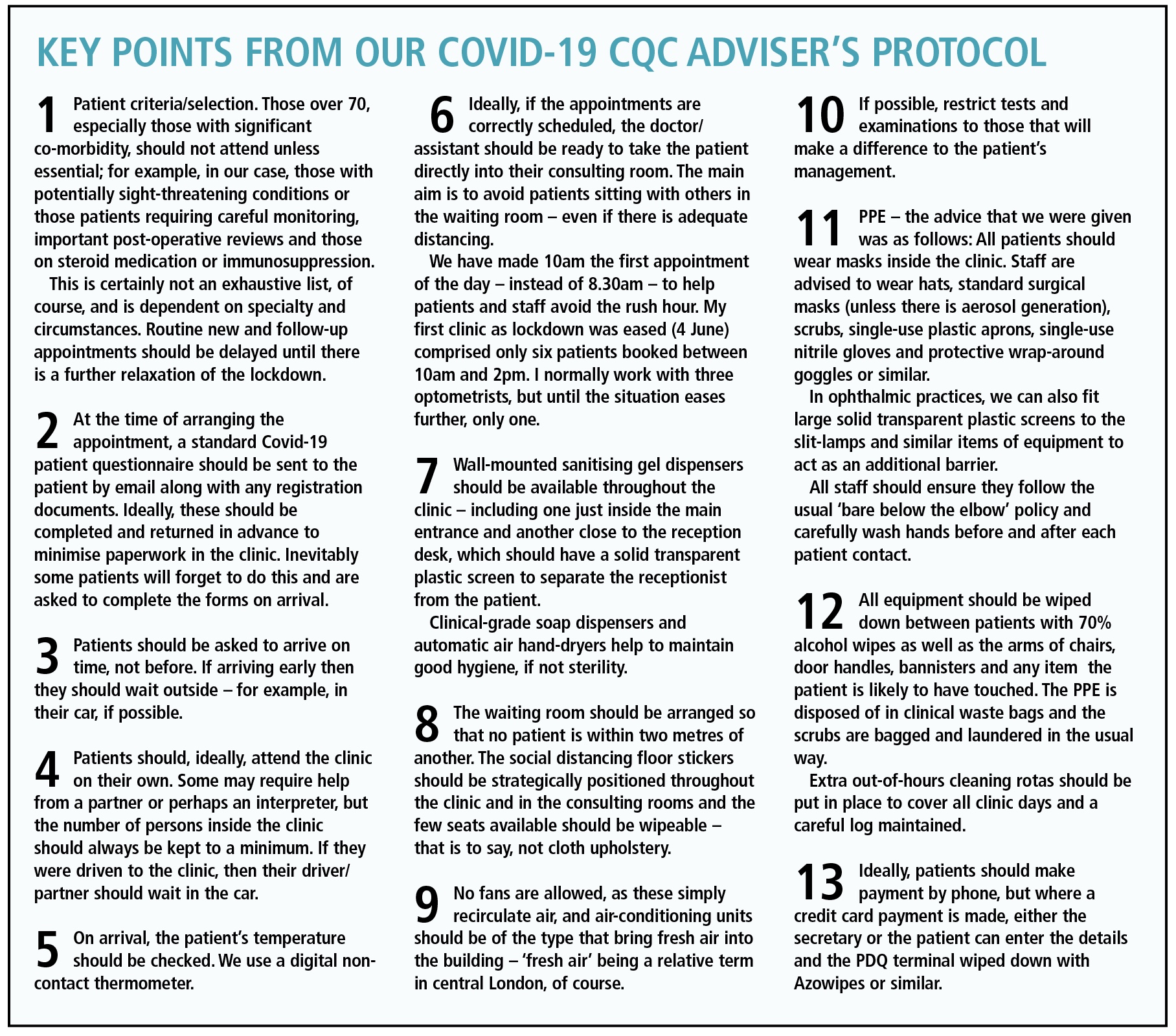 It’s certainly been a lot of work but doing things right, is so important to us. These are the rigorous measures we put in place so that we could confidently and safely open.

And we’re so glad to have done it. It’s good to be back.

I hope to see you soon,